ADISA, the organisation that sets security standards around the secure disposal of IT Assets, has released new research into the forensic analysis of smartphone factory reset functions.

Written by Steve Mellings, Founder of ADISA, and Professor Andrew Blyth of the University of South Wales, the white paper explores how effective smartphone factory reset functions actually are at removing data. This data is then used to offer businesses and individual users advice on how best to protect their personal information when handsets are disposed of.

The goal of this paper is to examine the assertion that the factory reset function as specified and supported by BlackBerry, Apple and Android (HTC/Samsung) erases data such that a threat actor function at risk level 1/2 is unable to recover any data. The research method utilised to explore this hypothesis is a quantitative one, where by structured data was placed on a device, the factory reset was then performed on the device and finally the device was analysed using standard COTS (commercial off-theshelf) tools.

The growth of the Internet and high-speed networking has created the ability for people to access many different types of content on mobile devices, such as mobile phones and tablets. While this increased usage has allowed people to work in a more agile manner, it has created security concerns relating to the management, and ease of access, of the content on these devices.

Although best practice has emerged for mobile phone forensics [6], it is true to say that no best practice has emerged for the data sanitisation of mobile phones. While studies have been undertaken examining the forensic recovery techniques for particular operating systems such as Microsoft Windows [3], no studies have been performed examining the ability of the factory reset function to forensically erase data.

This has resulted in many claims being made relating to the ease with which data can be recovered from a mobile phone [3] after the in-built factory reset function has been invoked. The goal of this paper is to explore the ability to forensically recover data from various 3G/4G devices with a view of offering businesses and users advice on how best to protect their personal information when such handsets are disposed of.

A sample of 24 handsets was supplied by the hardware partner. These handsets represented the most common makes and models found in the disposal channel at present and also represented the three main operating systems in place, namely BlackBerry, iOS, and Android. In this paper we will examine the ability of the factory reset to render the data unrecoverable using standard forensic tools. The following is a table of the devices that were analysed.

To facilitate in the measurement of the ability to recover data from a device it is important that we benchmark the forensic capability against which the handset will be tested. For the purposes of this paper the ADISA Threat Matrix was utilised and Threat Actor Capability and Compromise Methods Levels 1 and 2 were used as the forensic benchmark.

A number of devices of each type were received and checked for functionality. Prior to the start of the experiment each device was given a full battery charge and was then placed onto a stable (known) state via the execution of the factory reset function. The following defines the test methodology:

o Using the internal camera, a series of 25 predefined photos were taken.

o Using the internal camera, a series of five predefined videos were taken.

o Using the internal contacts application a series of 10 predefined contacts were placed on the device.

o Using the internal calendar a series of 10, one hour in length, appointments were scheduled.

o Using the internal SMS/MMS messaging application, a series of 10 predefined messages were sent and received.

o Using the internal Phone application, a series of five predefined phone calls were made.

o Using the Wi-Fi connection and the internal Internet Browser application a series of two predefined Google searches were made, and for each search one click through was made.

o The device was  then  connected to  the  computer and  a known WAV  file uploaded to the device. Using the internal audio player the WAV file was played to ensure the validity of the file. 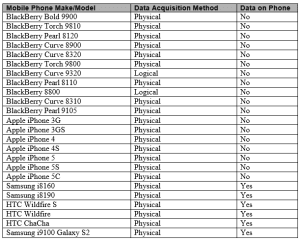 The data recovered from the Android devices included the following:

In summary, the factory reset function, when performed on the sample of BlackBerry and Apple devices, erases the user data from the device such that using standard forensic tools and techniques it is impossible to recover the data. This concludes that from a data sanitisation point of view the factory reset function, when performed on BlackBerry and Apple devices, is sufficient. It can be speculated that this is due to the fact that both BlackBerry and Apple control both the hardware and software platforms for their devices and as such, the software platform is will be integrated into the hardware platform so as to support specific functions.

However, the story with the Android devices is very different. The research findings show that the factory reset function, when performed on certain Android devices is not sufficient and that data can be recovered. In fact, the data recovered would indicate that even multiple factory resets would not be enough to erase all of the data. The reason for this conclusion is that forensic analysis of the Android devices showed that some of the devices still contained data from instant messaging services, and from the test methodology point of view no instant messaging services data was placed on the phone. It can be speculated that the poor performance of the Android devices is that as Android runs on multiple hardware platforms, the developers of Android are unable to integrate their software platform into the hardware such that specific hardware features cannot be utilised.

when  Disposing  of  Smart  Phones

The act of sanitising data is the final stage in the smartphone disposal process but the greatest issue is how to ensure the device actually makes it to the point where it is sanitised. As such it is recommended that the risk from poor asset management is viewed as an equal threat to the failure of a particular sanitisation technique. For this reason this paper includes some further best practice recommendations to follow when disposing of smartphones.

For low volume disposal processes such as individual users, then the factory reset function on the BlackBerry and Apple devices tested would be viewed as acceptable to protect personal data. For low volume disposal processes on Android handsets it is recommended to look at alternative external sanitisation methods such as proven software overwriting tools or physical destruction of the device. Both of these options introduce different risks as currently there are no government approved mobile phone overwriting solutions, so a specification would be required which shows evidence of independent testing having been done on the chosen overwriting software. The software provider should also offer indemnity insurance against product failure and the company undertaking that on your behalf should also offer further assurances and provide a detailed audit trail. For physical destruction, there is an environmental and health and safety impact of the batteries (removable and integrated), which needs to be considered. Seek expert advice on the best means of destroying your device before simply applying a DIY destruction process.

For higher volume disposal projects such as from a business, the same logic listed above would apply, but the difficulty in tracking devices to be assured that the reset has been done on every handset would introduce a process variability which would leave a potential exposure against regulatory requirements. It is recommended to seek a specialist company to perform a controlled collect, audit and sanitise service such that all devices, regardless of the operating system, are inventoried using the IMEI number, undergo a sanitisation technique which offers indemnity assurance, and which results in an audit trail to show that the process was successful.

The test hardware utilised during this research project was kindly provided by ShP Limited of Morecambe, United Kingdom. This hardware was received free from customer data and returned in the same state.

Launched in 2010, the ADISA Industry Standards for companies who participate in IT asset recovery now extend into the world of leasing, logistics, repair centre as well as the now well established IT Asset Disposal Standard.If your business wants to have confidence that their partners operate to the highest industry standards which reflect current best practice for handling data carrying assets look for ADISA Certification to give you reassurance.The audit process is multi-layered including full audits by UKAS certified auditors, unannounced operational audits and unannounced forensic audits. This approach ensures ADISA Certified companies are constantly being kept on their toes. With companies suspended and others removed from the program, the certification is something companies work hard to achieve and even harder to maintain.With free end user services such as tender review, compliance reporting and real-time monitoring, the ADISA certification program is something which many companies are now building into their requirements as a pre-requisite for their suppliers to hold.