How 3 Words Can Save A Life

Post the imposition of the coronavirus Lock-Down, myself and Shirley (my wife) decided to take some time out, and went over to Norfolk to spend some time on the edge of Her Majesty the Queens  Sandringham Estate.

To enjoy some relaxation time on the beach, we headed off to the not very busy location in Old Hunstanton. We had only been there for about half an hour when a frantic lady came over to us in very clear distress and asked ‘have you seen a little 6 year old girl go past’. I replied no. Then, the lady told us that her daughter had wondered off on the beach. Naturally myself and Shirley both jumped up to help – we started to recruit other beach dwellers to help with a search of a very long beach. At this point I motioned the missing girls farther to see if he had called the police – no he replied, adding his cell phone was flat! OK I responded, and handed him my wife’s phone to call 999, but as she was on Vodafone and there was no signal at that location, so she ran up to the car park to seek a connection, and to make the urgent call. In the meantime, being aware I was on BT Mobile I gave that a go – and all systems were go on a full signal. Now here is where the blog gets to be a little more to the point. Whilst my wife was on the car park, now talking to the Police, I, being unaware also became connected to the emergency services, and was put though to the Police. By now however, 15 minutes had already flown by, and things were naturally getting a tad fraught, and then unbeknown to me, my wife was experiencing the same conversation on the call as I:

Police: Where are you

Police: Are you near the Fun Fair

Response: No, at the far end – at the top of the Hill

Police: Can you see any landmarks

Response: We are next to the large car park – near to the old Coast Guard Lookout Tower

And so the conversation played on – now we were well into 25 minutes since the original contact I had with the young girls mum reporting a missing child – so all in all we are now talking half-hour+. Not good in any such situation as time is opportunity for a potential abuser (potentially in this case to evade the scene).

Eventually we managed to make the Police aware that we are on the beach in Old Hunstanton, and at this point they dispatched a unit – a further 7 to 10 minutes passed by before 3 Officers arrived, and at this stage on my estimation we are at 40+ minutes from the outset of the discovered loss!

Thankfully, as the Police arrived the home made plans on the beach had worked, and as the Officers stepped down onto the beach I was happy to signal them, and direct the frantic mum toward her little girl.

The point here being, in any incident time is valuable, and the more time lost through confusion at the start of an event, the higher the potential impact may be on a successful conclusion.

One major problem that may impact the response from any emergency service was that of accurate location data – which even based on a postcode (zip) can have a scattering of associated locations – and with the early stages of any incident being, in most cases, the potential tippling point for a positive outcome, wasted time can prove to be an unwanted impact. It is here where what3words brings the very real potential of providing accurate location data which, in this case of a missing child would have reduced the telephone conversation to an absolute minimum. Instead of going though a multitude question and responses in an attempt to convey the location, all the caller would need to confirm was, in this case, I am at what3words location ///estimate.defensive.september – See Fig 1:

What what3words brings to the party is the accuracy of GPS coordinates to the location being discussed. 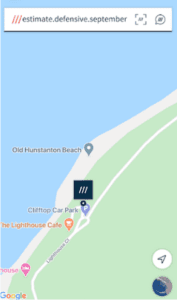 Whilst what3words is being taken up by a number of companies, such as the automotive industry where they are building the service into the satellite navigation systems, along with some emergency service providers, to be fully effective we need to educate the public as to its power and usefulness. From saving lives to accurate localization tractability. Needless to say, I am an advocate of the power of what3words offers, and can strongly recommend this on to every person in the universe as one productive application they must have on their cell phone – never leave home without it!