If You’re Typing the Word MCRYPT into your PHP Code, you’re Doing it Wrong

You probably should not be deploying your own cryptography to begin with, especially if you don’t already understand that encryption is not authentication. For production systems, use PECL libsodium or defuse/php-encryption and save yourself the headache.

The rest of this post is intended for PHP developers who still want to write their own cryptography code, or already have.

PHP’s optional mcrypt extension provides bindings for a cryptography library called libmcrypt, which has been collecting dust since 2007 (eight years and counting) despite plenty of bugs, some which even have patches available.

If bit rot weren’t enough reason to avoid using this library, the major design flaws which make it easier to write insecure code than it is to write secure code should.

Look at this list of mcrypt ciphers and tell me how you would implement AES-256-CBC. If your code looks like this, you’ve just run headfirst into the first (and arguably most common) mcrypt design wart:

MCRYPT_RIJNDAEL_192 and MCRYPT_RIJNDAEL_256 instead refer to non-standard, less-studied variants of the Rijndael block cipher that operate on larger blocks.

Considering that AES-256 has much worse key scheduling than AES-128, it’s not at all unreasonable to suspect there might be unknown weaknesses in the non-standard Rijndael variants that are not present in the standardized 128-bit block size version of the algorithm.

Isn’t it great that mcrypt makes you feel dumb for not knowing details that you probably shouldn’t really need to know? Don’t worry, it gets worse.

We already stated that not authenticating your ciphertexts is a bad idea, and in all fairness, padding oracle attacks are going to be a problem in CBC (Cipher Block Chaining) mode no matter what padding scheme you select if you fail to Encrypt then MAC.

If you encrypt your message with mcrypt_encrypt(), you have to choose between writing your own plaintext padding strategy or using the one mcrypt implements by default: zero-padding.

To see why zero-padding sucks, let’s encrypt then decrypt a binary string in AES-128-CBC using mcrypt (The result of running this code is available here) :

As you can see, padding a plaintext with zero bytes can lead to a loss of data. A much safer alternative is to use PKCS7 padding.

OpenSSL Does It Better

Here is an example of an unauthenticated AES-256-CBC encryption library written in Mcrypt with PKCS7 padding. 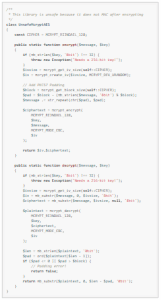 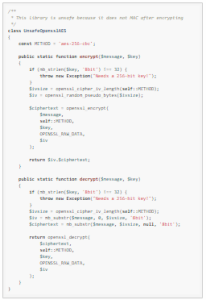 In almost every metric, openssl wins over mcrypt:

Simplicity, security, and performance. What more is there to ask for?

There are, however, two things with OpenSSL that you should watch out for.

Don’t use mcrypt. If you’re typing the word mcrypt into your code, you’re probably making a mistake. Although it’s possible to provide a relatively secure cryptography library that builds on top of mcrypt (the earlier version of defuse/php-encryption did), switching your code to openssl will provide better security, performance, maintainability, and portability.