The main findings of the report are:

•        More than half (59.5%) of users encountered pornography; over a quarter (26.6%) landed on websites dedicated to gambling; every fifth user stumbled across sites featuring weapons; and almost the same number were confronted by strong language.

•        Websites carrying this kind of inappropriate content (pornography, gambling, weapons, strong language), along with others featuring drugs, tobacco and alcohol, were the ones blocked most often by Kaspersky Lab protection solutions.

•        China, the USA, Germany, the UK and Russia were the countries with the greatest frequency of detections registered by the Parental Control module of Kaspersky Lab’s protection solutions.

The Internet has long ceased to be a resource just for grown-ups. Children today are often far more active Internet users than their parents. But is it safe enough for children to use without fear of facing inappropriate content? Previous research carried out by Kaspersky Lab shows that  YouTube’s ‘suggested’ videos which sit visibly alongside clips or episodes of popular children’s television programmes such as Peppa Pig, Rastamouse and Dora the Explorer, actually mean that on average, children are just three clicks away from content better suited to a more mature audience. This may include music videos featuring violence, nudity or even car crash compilations, highlighting the importance of monitoring children whilst they are online. To delve deeper into this issue, Kaspersky Lab decided to investigate potential online threats to children, by analysing data from users of Kaspersky Lab products equipped with a Parental Control module. 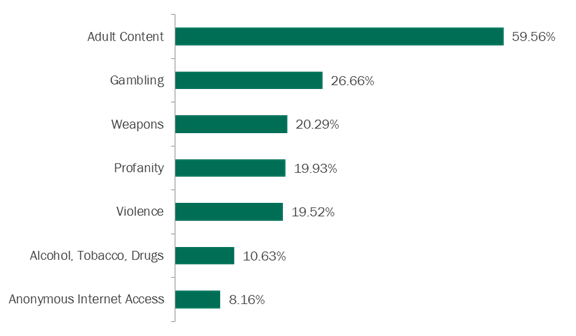 Following China, USA, Germany and Russia, France, Vietnam, Brazil and Algeria also ranked in the top ten in terms of inappropriate content detection – but were relatively safer due to a lower frequency of detection. Each of the top ten most affected countries has distinct characteristics when it comes to the prevailing online threats for children. For instance, adult content was the biggest threat to users in Germany (with 172 detections per user), China (144.18 detections per user), and the US (126.16 detections). Content about alcohol, tobacco and drugs was a major threat to users from Russia, Germany, the USA and France. The frequency of detection was especially high in these countries. This kind of content also proved popular in Brazil and the UK.

“To protect young people, we recommend that adults choose protection solutions with Parental Control technologies and make full use of safe “children” modes in search engines and applications that allow access to multimedia content and which are used by children. Although Parental Control technologies can block access to websites with content that is dangerous or distressing for children, they cannot offer reliable protection in situations where safe-by-default web services like social networks or chats are misused by predators or users conducting cyberbullying campaigns,” said Konstantin Ignatev, Web Content Analysts Group manager at Kaspersky Lab.

“Internet security deserves to be taken as seriously as real-life physical security. That’s why we urge parents to take an active part in their children’s real and digital lives.  Only then can they be sure that they won’t miss the moment when their child might need their support,” said Konstantin Ignatev.

Read more about online threats to children in full text of the research on Securelist.com.

Kaspersky Lab is the world’s largest privately held vendor of endpoint protection solutions. The company is ranked among the world’s top four vendors of security solutions for endpoint users*. Throughout its more than 17-year history Kaspersky Lab has remained an innovator in IT security and provides effective digital security solutions for large enterprises, SMBs and consumers. Kaspersky Lab, with its holding company registered in the United Kingdom, currently operates in almost 200 countries and territories across the globe, providing protection for over 300 million users worldwide. Learn more at www.kaspersky.com.