Internal IT Threats Lead to Most Data Loss, According to Kaspersky Lab Survey

According to a global survey of IT professionals, 27 percent of all businesses have lost sensitive business data due to internal IT threats in the past 12 months. However, the data shows that for the first time since Kaspersky Lab began tracking these incidents in 2011, accidental data sharing by staff now produces a greater amount of lost data than software vulnerabilities. Alarmingly, both sources of data loss are most commonly found in businesses within the Utilities & Energy and Telecom business sectors. 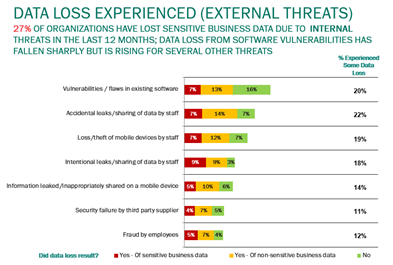 From 2011-2014, Kaspersky Lab’s ongoing research of threats to businesses found a nine percent drop in reported software vulnerabilities encountered amongst medium, large and enterprise businesses (small businesses were excluded from this statistic). The same group also reported a five percent decrease in data loss resulting from software vulnerabilities. On the other hand, reports of accidental data leaks by staff have remained steady during that time period, while the amount of lost data attributed to accidental data leaks by staff has increased by two percent, making accidental data leaks the top internal threat responsible for lost data.

One of the most alarming trends uncovered by Kaspersky Lab’s investigation of internal threats is how often they occurred in businesses within infrastructure sectors. The survey found that 40 percent of business in the Utilities & Energy sector encountered software vulnerabilities within the past year–the highest reported across all business sectors. The Telecom sector also reported a high rate of software vulnerabilities at 35 percent.

To read more insight and research about software vulnerabilities and other internal business threats, visit the Kaspersky Lab Business blog.

Kaspersky Lab is the world’s largest privately held vendor of endpoint protection solutions. The company is ranked among the world’s top four vendors of security solutions for endpoint users*. Throughout its more than 17-year history Kaspersky Lab has remained an innovator in IT security and provides effective digital security solutions for large enterprises, SMBs and consumers. Kaspersky Lab, with its holding company registered in the United Kingdom, currently operates in almost 200 countries and territories across the globe, providing protection for over 300 million users worldwide. Learn more at www.kaspersky.com.