One in every nine business PCs around the world is at risk of infection from malware at any time, according to new research by Avast (LSE:AVST), a global leader in cybersecurity. Pakistan, Vietnam and China topped the list of riskiest places to be a business with more than a one in three chance of infection. The United States, the Netherlands and Ireland recorded the lowest business risk ratio globally; however, each still had a one in eleven chance of infection.

The findings were released in the Avast Global PC Risk Report 2019 which analyzed Avast’s threat detection and intelligence to discover the frequency of cyberattacks targeting PCs inside business networks. The analysis, calculated over a 30-day period between August and September 2018, compares the likelihood of a cyberattack on PCs in small to mid-sized businesses (SMB) by country and region in order to determine the most ‘at risk’ places.

In the UK, 10% of business PCs are at risk of exposure to malware, compared to 8% in the US and Netherlands, and 9% in Ireland and Australia. 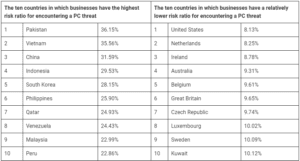 In calculating the risk ratio by Windows operating system (OS), Avast found businesses using Windows 7 and 10 are most at risk with a one in nine chance (11.12% and 10.95%, respectively) of encountering a threat, followed by Windows 8 users (9.38%) and Windows Vista users (6.97%).

“With the average cost of cybercrime to an organization now estimated to be $1.43 million, the financial and reputational fallout for an SMB after a successful cyberattack could be irrecoverable,” said Kevin Chapman, General Manager and Senior Vice President, Avast Business. “Our new Avast Secure Web Gateway is a SaaS-based web security product that provides SMBs with enterprise-grade protection against the prevalent and advanced threats analyzed in this report. This builds out our layered security approach ensuring small businesses are protected on the network as well as at the endpoint as the number of threats hitting organizations continues to grow.”

The Avast 2019 Risk Report covers 158 countries around the world. The statistics are averages based on two types of threats: total and advanced. Total threats include both simple and advanced threats. Simple threats can be defined as malware developed by script kiddies that do not contain advanced packers, anti-emulation features and other types of self protection. Advanced threats are those spread by nation states, malware with custom packers and hardcore anti-emulation features that is unknown and able to bypass common protection technologies. A link to the full report can be found here.

Threat Intelligence: this report is based on data obtained by Avast’s threat detection network between August and September 2018. The data relates specifically to threats that targeted Avast’s PC user base and were blocked. In order to provide statistically relevant data, this report covers countries, territories and regions with a sample size of at least 10,000 computers belonging to home users and at least 1,000 computers used by businesses.