A week after the global outbreak of WannaCryptor, another ransomware has been making rounds.

Detected by ESET as Win32/Filecoder.AESNI.C and also known as XData ransomware, the threat has been most prevalent in Ukraine, with 96% of the total detections between May 17 and May 22, reaching the peak of its activity of Friday, May 19.  ESET protects its customers against this threat since May 18.

However, we’ve been tracking the malware since December 8, 2016, when the version Win32/Filecoder.AESNI.A first appeared. For the AESNI.A variant, some of the decryption keys have been recently published on a BleepingComputer.com forum. 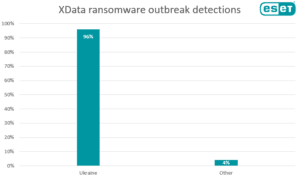 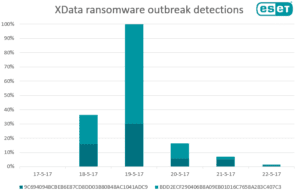 Based on ESET’s research, the ransomware appears to have been distributed through a Ukrainian document automation system widely used in accounting. Since the infection ratio is still low, a probable distribution scenario involves some kind of social engineering – e.g. connected to a malicious software update – however, it is still early to tell with absolute certainty.

Once it infects a computer, the main file drops a legitimate system utility – SysInternals PsExec – and then executes dropped ransomware sample (Win32/Filecoder.AESNI.C.).

If executed with admin privileges, the ransomware can infect an entire network. To do so, it uses the Mimikatz tool to extract admin credentials and then uses them to run copy of itself on all computers in the internal network.

If you’re interested in why the threat is called AESNI, it is derived from the ransom note dropped by one of its previous variants: 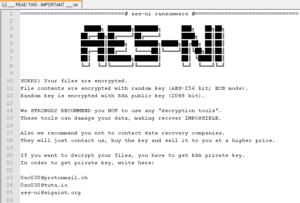 Moreover, there is also a functionality behind the name – the ransomware checks whether the affected machine supports Advanced Encryption Standard Instruction Set aka AES-NI. If that’s the case, it uses it to encrypt victims’ data faster thanks to hardware acceleration.

How to stay safe

Particularly in this case, separating admin and user accounts would prevent much of the damage, as the XData ransomware misuses admin passwords if run on accounts with admin privileges. Without admin privileges, XData is only able to infect one computer instead of the whole network.

In general, here’s what you can do to protect yourself against most ransomware: