Misunderstood: WikiLeaks, The CIA, And Encryption

Much of the excitement surrounding the WikiLeaks “Vault 7” release of purported CIA documents concludes that the CIA has broken encryption.  We didn’t reach the same conclusion.  We explore potential vulnerabilities in encryption apps and conclude that end-to-end encryption, coupled with strong protection at the device level remains the best way to secure everyday communication.

WikiLeaks’ recent release of documents purportedly from the CIA, called “Vault 7,” has created quite a media storm.  Allegedly, the CIA has been able to bypass encrypted messaging apps on Android phones.  Many commentators conclude that the CIA has been able to “break” encryption, enabling it to decrypt all kinds of secure information.  If anyone, including the CIA, could break state-of-the-art encryption algorithms, the result would be catastrophic.  Encryption is used to safeguard a lot of information, and if one entity could break it, we are all very vulnerable.

We have seen no reported evidence, however, that the leaked documents contain proof that encryption has been broken.  Rather, the news implies that the CIA could be using vulnerabilities in phone and computer software to gain access to information before it’s encrypted.

Let’s consider some ways apps using encryption could be vulnerable.  A typical messaging app works like this:

A message (e.g. email or chat) is created using an app on a phone or computer.  It’s then encrypted by the app and then sent over the Internet to a server, which stores this message along with others.  It is then decrypted at some point and delivered to the recipient’s device.  There are several ways an attacker can compromise this system.

Decrypting at the Server

Most Internet applications use encryption to secure communications between a user’s device and the server.  These applications generally use SSL (secure sockets layer) or TLS (transport layer security), standards that encrypt traffic between client devices (phones and computers) and servers.

The result is a significant vulnerability at the server.  This is a big problem because, from an attacker’s perspective, the server is the richest target.  If the attacker compromises the server, it could see all the messages from all users of the system, potentially leaking a lot of information. Because the most damaging attacks occur at the server, the technology industry has historically paid a lot of attention to protecting it, in essence building “taller walls” around data centers.  Inevitably, however, servers are compromised.  Notable examples include the email attacks on servers at the Democratic National Committee, the attack on Sony’s email servers, and Yahoo’s admission that up to a billion user accounts may have been compromised over the past few years.  All of these were attacks that resulted in information compromised from servers.

With end-to-end encryption, the server stores only encrypted data; server attackers see only gibberish.  This significantly reduces the likelihood of large scale breaches.

The Keys to Encryption

Any time encryption is used, it relies on keys (which are essentially numbers with lots of digits) that lock or unlock the data.  These keys must be safeguarded.  Even if data is encrypted end-to-end, if an attacker were to obtain the decryption key then users’ data would be unprotected.  Similarly, if an attacker were to trick a user into using the wrong encryption key, the user’s information would also be compromised. 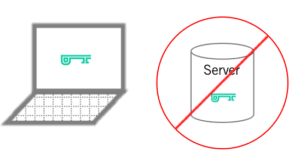 Attacks Prior to Encryption

Even when well-crafted end-to-end encryption is used, information has to be decrypted somewhere, and it’s usually in an app running on the user’s computer or mobile device.  Vulnerabilities are discovered in phone and computer operating systems on a regular basis.  Some software developers and phone manufacturers are pretty good at fixing these security holes, hence, it is important to apply security patches in a timely manner. 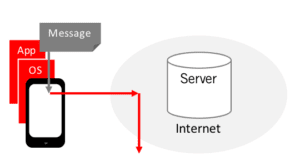 The WikiLeaks documents suggest that the CIA is using a variety of techniques that can exploit vulnerabilities in computer and phone software.  We have not seen evidence that the encryption algorithms themselves have been broken.  Rather, the articles we’ve seen imply that the CIA could be exploiting device vulnerabilities to gain access to information before it’s encrypted.

In the end, to achieve a strong level of security for the entire user-to-user path, one needs a combination of a well-designed end-to-end encryption protocol with strong protection within users’ devices.