Cytegic DyTA intelligence platform gathers, processes and analyses hundreds of thousands of intelligence feeds on a month basis, to allow a quick and understandable cyber-trend analysis. DyTA enables cyber-intelligence analysts and CISOs to understand and analyze the threat level of each attacker and attack method relevant to their organization, according to their geo-political region, industry sector and corporate assets.

The following report represents the most interesting and active cyber-trends that DyTA analyzed, in addition to noteworthy vulnerabilities, malware developments and cyber-attacks and campaigns.

April compared to March – In North America, attackers were significantly more active in April than in March. As our DyTA system forecasted, the rising trend began at the end of March and continued throughout April. The trend was especially dominant with financial hackers, political cyber-warriors (nation-states and terrorists) and the insider threat. According to our forecasts, this trend will continue to rise in the coming weeks.

OpIsrael – while the annual hacktivist campaign against Israel was a dud, our DyTA system was able to identify several interesting patterns:

DDoS refuses to die and is becoming a military-grade weapon, as seen in the Chinese “Great Cannon” which was apparently already used against Github. – Interesting espionage campaigns were uncovered – one targeting the US Department of State and White-House, and the other coming from China and targeting government and media entities in south-east Asia.

When compared to March, April was significantly more active for most attackers in North-America, namely financial hackers, political cyber-warriors (nation-states and terrorists) and the insider threat.

While hacktivists and sensationalists were somewhat more active this month, mainly due to ricochets from OpIsrael and the conflict in Yemen, their activity level was low. 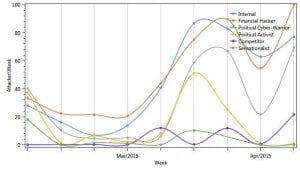 When looking from the prospective of TTPs it is clear to see a constant rising trend starting at the end of March and continuing all throughout April, as our system forecasted. The main TTPs which experienced the sharpest rise were malware, resource depletion and exploitation of privilege, with social engineering, zero-day vulnerabilities and injection as the main vectors. 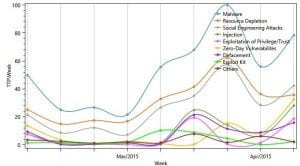 b. Most Targeted Assets

The most targeted assets on the attackers’ scope this month were, as usual in recent months, Payment Cards, Personal Identifiable Information (Client Data) and “straight-forward” financial assets such as Monetary Value (bank accounts, Bitcoin, among others) and Financial Transactions. It is interesting to see that the Middle-East is becoming very similar to North America, when it comes to the targeted assets. This comes to show the shift that attackers have done to become geographically-agnostic and asset-focused. 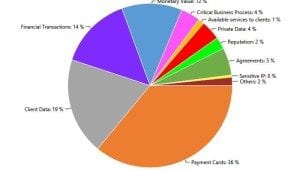 As in previous years, the Anonymous collective’s Arab and Muslim affiliates, led by

AnonGhost, conducted their annual OpIsrael campaign which peaked on April 7th. And again, as in previous years, the campaign ended with a whimper, without any major success or achievement. Actually, this year’s campaign was even less successful than previous ones, perhaps due to better preparations on the Israeli side, and perhaps due to the abundance of ongoing campaigns conducted by the same attackers (against ISIS, against Al-Qaeda, surrounding the conflict in Yemen, to name a few).

Nevertheless, there were some interesting things that popped out of the graphs:

The attacks started to become severe a week before April 7th and in some cases lasted until, and even peaked, a week after.

The IT sector (ISPs included) was predominant, followed by the likely suspects – media, banks and government. Looking at the daily view, the attacks on the IT sector had a strengthening wave pattern, with a couple of days between each wave.

As usual, the top attack methods employed by the hacktivists were resource depletion, social engineering, defacements, injections and malware of different sorts. 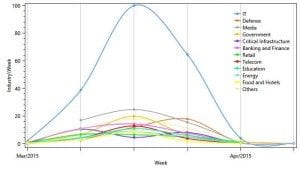 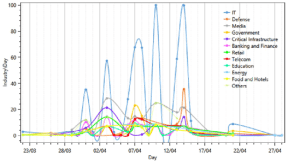 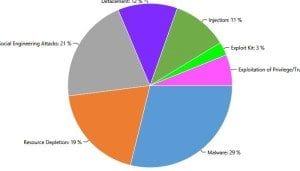