Blundering Brits are leaving family, friends and workmates raging or red-faced – with their email and text gaffes, according to new research.

Almost 70 per cent said they regularly send messages to the wrong person.

Of those who accidentally sent a bitchy email or text message to the target of their whinge, a third ended up having a blazing row with them – and one in 10 has not spoken to them since.

One in 10 admitted they had been sacked for inadvertently sending a rude picture or risqué joke to their boss. 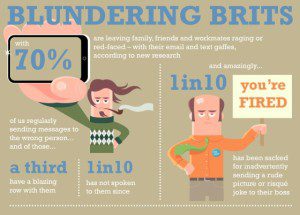 And one in three have sent a message that lost a lot in translation after being mangled by their Smartphone’s ‘autocorrect’ feature. 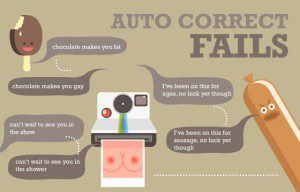 The poll of 2,000 UK adults was conducted by paid survey site OnePoll.com.

It also revealed a host of embarrassing slips in which people accidentally sent critical or embarrassing messages to the wrong recipients. They included: 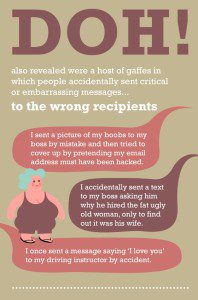 The survey revealed that people are most likely to send emails to the wrong people via text message, followed by desktop email, smartphone email, tablet email and WhatsApp.

Over 40 per cent said they had been on the receiving end of a message clearly intended for someone else.

One in 10 confessed to penning a raunchy or romantic text to their partner and then sending it to the wrong person.

Workmates were most likely to get these, followed by the sender’s mother, boss, sister and father.

Almost 40 per cent of respondents admitted having accidentally hit the ‘reply to all’ button on an email. 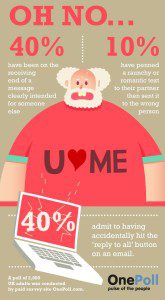 A spokesman for OnePoll said :

“The results of our survey show that it always pays to double-check the message – and the recipient – before pressing ‘send’.

“A split-second’s carelessness can cause huge embarrassment and can lead to bust-ups with friends, family or work colleagues.

“We live in a fast-moving age but it pays to take a moment to review the message before pressing the button.”