FANCY BEAR Has An (IT) Itch That They Can’t Scratch

Following news reports that the Democratic Congressional Campaign Committee (DCCC) was breached via a spoofed donation website, the ThreatConnect Research team and Fidelis Cybersecurity teamed up to collaborate and take a look at the associated domain to ferret out additional details on the activity.

The initial indications from the DCCC breach suggest FANCY BEAR pawprints based on the following:

The following would strengthen our assessment of FANCY BEAR’s involvement:

Both of our companies respectively researched the domain secure.actblues[.]com, which spoofs the DCCC’s legitimate donation site secure.actblue[.]com. FANCY BEAR actors previously used the same technique with the domain misdepatrment[.]com, which spoofed the legitimate domain belonging to MIS Department, a Democratic National Committee IT contractor. The actblues[.]com domain, which is hosted on a Netherlands IP Address 191.101.31[.]112 (Host1Plus, a division of Digital Energy Technologies Ltd.), was registered using a privacy protection service through the I.T. 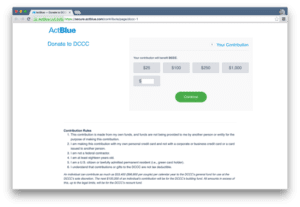 After reviewing the Start of Authority (SOA) record for actblues[.]com we were able to identify the email address fisterboks@email[.]com originally registered the domain.

This fisterboks@email[.]com email address has previously registered three other domains, intelsupportcenter[.]com (hosted on a dedicated server at 81.95.7[.]11), intelsupportcenter[.]net (not active), and fastcontech[.]com, all of which have been attributed to FANCY BEAR activity in an official German Intelligence (BfV) report Cyber Brief Nr. 01/2016. It should also be noted that fastcontech[.]com is hosted at the same ISP as one of the IP’s listed by Crowdstrike for FANCY BEAR (185.86.148[.]227).

Upon further review of the actblues[.]com domain using the ThreatConnect Farsight Passive DNS integration, we were able to identify the date and time when the domain first resolved. 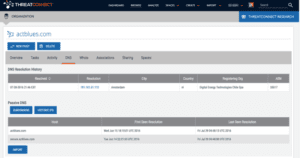 The actblues[.]com domain was initially registered on June 14th and resolved to the 191.101.31[.]112 IP shortly thereafter. This indicates that the domain was operationalised in less than a day. Stepping out and looking at additional context related to the DNC activity, we identified that CrowdStrike’s initial report on the DNC hack was also published on June 14th. This suggests that, after being outed, FANCY BEAR actors shifted their operation immediately to another target that might allow them to continue collection against Democratic figures involved in the U.S. election.

The surrounding infrastructure around the secure[.]actblues[.]com host in the 191.101.31.0/24 network merited a closer look. In one example, we identified that the suspicious domain geopoliticsmonitor[.]com resolved to IP Address 191.101.31[.]116. According to DomainTools, the WHOIS information for geopoliticsmonitor[.]com lists boltini_sandy@post[.]com as the domain registrant and I.T. Itch as providing administrative and name services. 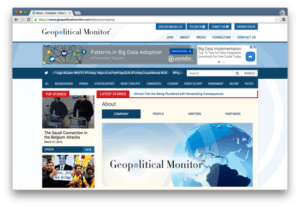 This domain appears to be a spoof of the legitimate domain geopoliticalmonitor.com. Geopolitical Monitor lists itself as a Canadian “international intelligence publication and consultancy”. This aligns with the suspicious domain stratforglobal[.]net, which uses the the Xtra Orbit name services (xtraorbit[.]com / xo.*.orderbox-dns.com) and registrant idolbreaker@mail[.]com detailed in our previous blog. Stratfor lists itself as a “geopolitical intelligence firm that provides strategic analysis and forecasting to individuals and organisations around the world.” Targeting of either of these organisations and or their customers might yield strategic insights or facilitate secondary operations.

As well as other suspicious domains such as:

The name services in question – .bitcoin-dns[.]hosting – were also used by misdepatrment[.]com, a spoofed domain (of the legitimate misdepartment.com) that resolved to a FANCY BEAR command and control IP address used in the DNC breach. The same name servers have been used by other FANCY BEAR-linked domains as well as a long list of other suspicious domains that have not been attributed to any particular threat actor.

The domains actblues[.]com and fastcontech[.]com – the two fisterboks@email[.]com domains we identified from the SOA records – were registered through a different name server called I.T. Itch. fastcontech[.]com was also identified in the German Intelligence report on FANCY BEAR and is hosted on a dedicated server at the 185.61.149[.]198 IP address.

When we looked to see who else was using the I.T. Itch name server, we found httpconnectsys[.]com. This domain is notable as the SOA recordindicates that it was initially registered by frank_merdeux@europe[.]com, the same email address that was used to register the misdepatrment[.]com domain. At the time of this writing, we have not identified any other name servers used by either registrant.

Naturally, this promise of anonymity is attractive to cyber threat actors. However, it is this proclivity for anonymous infrastructure, coupled with available SOA records, that led the ThreatConnect Research team to identify additional APT-related infrastructure using I.T. Itch name servers, despite the use of Privacy Protect services to mask registrant data.

We took a look at all of the domains that were registered this year that currently use the same name server (ititch[.]com) as actblues[.]com. From there, we attempted to identify those domains that were hosted on dedicated servers and stood out the most with respect to their name, and potentially what domains or topics they spoofed. Malicious actors from a variety of APT groups will often host their malicious domains on dedicated IP addresses. While this is NOT indicative of malicious activity, it can help us prioritise domains for additional review.

It is important to note that name server co-location does not definitively associate suspicious domains with previous malicious activity. Furthermore, we cannot immediately confirm that the domains listed below are hosting malware or are otherwise attributable to malicious APT activity; however, they deserve additional scrutiny due to the patterns identified above, and the fact that they were registered using a service like I.T. Itch.