In my last blog post on WiFi, I shared my traveling experiences of observing users’ behavior with their mobile devices, particularly how they tend to indiscriminately access public, insecure Access Points. Criminals and researchers alike could exploit such unsafe behavior to learn a variety of things about that particular user. If they so chose, they could then use that information to compromise his/her data.

I am now back in the UK, so I decided to see if my domicile would fare better in security than those AP’s and users whom I encountered while abroad. Unfortunately, my expectations were soon dashed. We are just as insecure here in the UK. In fact, when I take into account the greater number of users, as well as the onslaught of BYOD, I would even go so far as to say that we are far worse off when it comes to likelihood of compromises.

Using an unsecured public AP in the UK, I joined a crowd and connected my test device to the localised WiFi community. I then ran a couple of discovery tools that ultimately told me there were around 30 active users connected to the AP. Mimicking the behavior of an attacker, at this point I looked though the list of users to select juicy targets according to their suggested corporate profiles and the company of their devices [a nice touch, I thought]. I quickly found something interesting, but alas, it was secure from the employed modus operandi [MO] of PAN invasion. So I moved on. Then, as if by magic, a Windows 8 [8.1] system popped up. Moving along the attacker’s thought process, I decided to ascertain what services were running and what ports were offering potential access. In this case, a quick investigation revealed the following:

The one that got my attention was 445, so for my next step, I elected to see if the port allowed any access. I did so by running a SAMBA Client. Using the following profile, I attempted to connect:

I received these results: 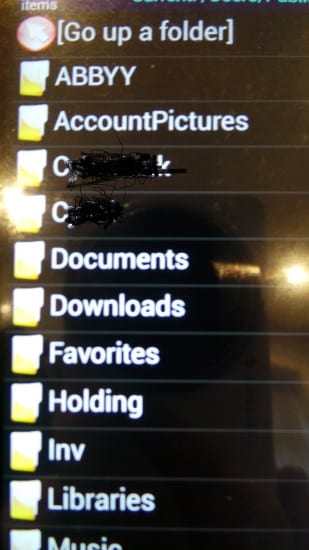 And there you have it. A directory full of valuable information, sitting on an unsecured AP and wide open to anyone who cared to take a look. Clearly, we still have a long way to go with BYOD, and there is, it would seem, a massive hill with regards to educating the public about using unsecured promiscuous environments.